Justin Rose captured his ninth PGA Tour victory in dominant fashion at the Fort Worth Invitational. Rose finished at 20-under on Colonial Country Club’s classic layout to barely miss out on tying Zach Johnson’s record-setting 21-under in 2010.

“Really really proud of this one, it’s a special victory, winning here at this venue is what means so much,” Rose said. “When I picked up the trophy, the first thing I saw was Ben Hogan’s name. Twice. I know there’s many more, Jack Nicklaus, you guys know the list and I’m very proud to be a part of that.”

FORT WORTH, TX - MAY 27: View of 18th green at the Fort Worth Invitational on May 27, 2018 at Colonial Country Club in Fort Worth, TX. (Photo by George Walker/DFWsportsonline) 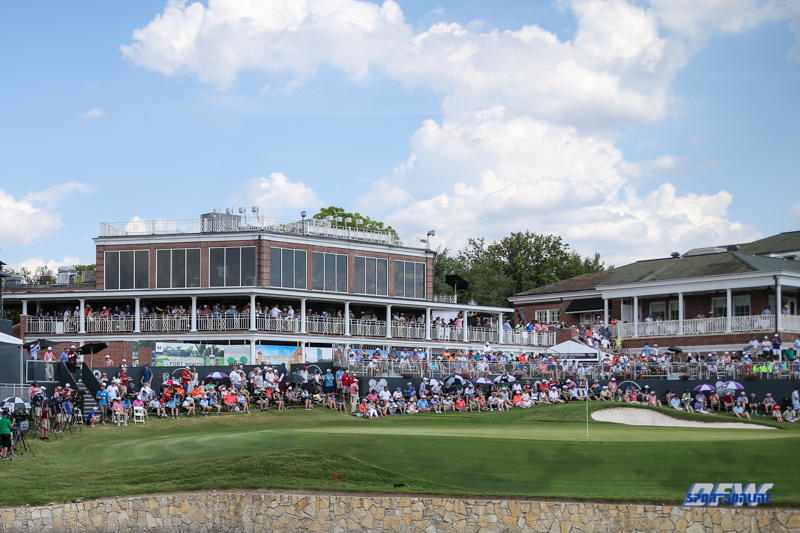 FORT WORTH, TX - MAY 27: View of 18th green at the Fort Worth Invitational on May 27, 2018 at Colonial Country Club in Fort Worth, TX. (Photo by George Walker/DFWsportsonline)

Rose began the day four shots clear of Brooks Koepka and kept his foot on the gas with birdies on seven of the first eleven holes. Koepka also came out on fire and matched his second round 63 with another 7-under performance that kept the pressure on Rose all day.

“To win in the style or fashion that I did today, it was a hard fought victory,” Rose continued. “For Brooks to shoot 63 in the final pairing and not win took some doing for me today. It was a really fun day to be a part of. Glad that my ‘A Game’ turned up when I needed it.”

Rose has a habit of winning on golf courses with a plethora of history including Congressional Country Club, Muirfield Village Golf Club and Merion Golf Club and can now add the course known as “Hogan’s Alley” to the illustrious list.

“I think winning is is winning no matter where you win,” Rose said. “If you are able to win at a course that has great history and has had great champions — and if I begin to look at the courses that I’ve won at, this definitely strengthens that group even more.”


The victory at Colonial made Rose the fifth multiple winner on the PGA Tour this season following his win at the WGC-HSBC Champions in Shanghai this past October.

Koepka had nothing but praise for Rose following what was essentially a Sunday duel in Fort Worth between two past U.S. Open champions.

“It was actually quite fun to be honest with you,” Koepka said. “He played so well. It was impressive to watch. His ball striking was very, very impressive today … Just every hole I feel like he birdied.”

— Jon Rahm finished i a tie for fifth to follow up his second place finish in his Colonial debut last year.

— Rickie Fowler played in his first Fort Worth Invitational since 2014 and finished in a tie for 14th.

— Jordan Spieth’s difficult year continued as he had his worst showing at Colonial with a tie for 32nd.

— 2014 Fort Worth Invitational champion Adam Scott made the cut on the number but surged up the leader board on Sunday with a final round 64.