DALLAS —The Dallas Mavericks announced today they have extended the contract of two-time All-NBA First Team guard Luka Dončić. The $207 million extension is the largest guaranteed rookie extension in NBA history and is a landmark deal for Dončić, the Mavericks and BDA Sports. Dončić is the first and only super-max eligible player to sign this deal based on making All-NBA First Team in two of his first three seasons. 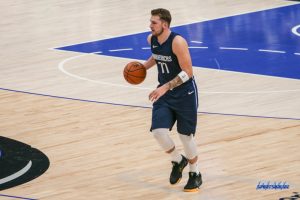 “Today is a dream come true,” Dončić said. “The game of basketball has given me so much and has taken me to so many amazing places. I am humbled and excited to remain in Dallas as part of the Mavericks. I’m committed to the organization and appreciate the support of my fans. Along with this contract, I’m also happy to announce that I am increasing my efforts and expanding The Luka Dončić Foundation. My foundation is an international nonprofit that will give back to places that mean so much to me like my home country of Slovenia, as well as the communities of North Texas.

“I’m happy to share that, in partnership with 2K Foundations, we will unveil two basketball courts in Slovenia later this year. We are refurbishing my childhood courts where I practiced and learned the game. The opportunity for kids to play on the same courts and pursue the same dream is something I am very excited about.

“I can’t wait for the future both on and off the basketball court.”

The Slovenian averaged a team-best 27.7 points, 8.0 rebounds, a team-high 8.6 assists and a team-high 34.3 minutes in 66 games (all starts) last season. He ranked sixth in the NBA in scoring, 21st in rebounding and fifth in assists, finishing in the top 25 for all three categories for the second year in a row.

Dončić recently competed with the Slovenian national team at the 2020 Olympics in Tokyo. Dončić joined his squad shortly after the Mavericks’ postseason run and led Slovenia through the qualifying tournament to a berth in the Games. Despite recording the third-ever triple-double in Olympic history, Dončić’s run at a gold medal came to an end in the semifinal round with a one-point loss to France. Although Dončić and the Slovenians won EuroBasket 2017, it was the first time the nation had ever qualified for the Olympics in men’s basketball.