By John Henry, The Sports Xchange

ARLINGTON, Texas — Despite appearances, Nick Martinez knows his role with the Texas Rangers.
It’s called “be ready at a moment’s notice no matter what you’re called on to do.”
The Texas right-hander was more than ready in a spot start on Tuesday. 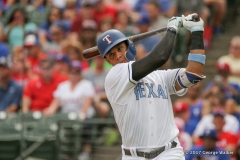 Martinez threw 6 1/3 strong innings and made Texas’ four runs in the first inning stand up in the Rangers’ 6-1 victory over the Toronto Blue Jays.
Martinez (2-3), who thought he was back in a long-relief role until Andrew Cashner went down, yielded one run on two hits and two walks while striking out three for the Rangers, who snapped a two-game losing skid.
Working on six days’ rest, Martinez set down 18 of the 23 batters he faced and never allowed more than one runner on in an inning. It was his second straight quality start.
The right-hander worked around base runners in the second, third, fourth and fifth innings. He left Justin Smoak on as he left after 103 pitches in the seventh.
Right-hander Jose Leclerc worked out of a one-out jam to put down the Blue Jays’ best scoring opportunity.


“Just be ready whenever your name is called,” said Martinez, who is 1-0 with a 1.72 ERA in his past three games, including two starts. “You have to battle and grind it out. Whatever they need me to do.
“It was a great game overall. The guys came out swinging, got some really good at-bats and we were able to execute a game plan today.”
Left-hander Francisco Liriano (3-3) took the loss for Toronto.
Adrian Beltre had an RBI in the Rangers’ four-run first and a solo home run in the eighth. Carlos Gomez and Nomar Mazara also homered, while Jonathan Lucroy and Mike Napoli each had an RBI.
Beltre moved past Harmon Killebrew and into a tie with Miguel Cabrera for 35th all-time with 1,585 RBIs. The homer represented his 1,079th extra-base hit, moving him past Cal Ripken Jr. for 23rd all-time.
The hit was career No. 2,960.
Mazara has homered in two straight games and four of his last 12.
Liriano, in his fourth start since coming off the disabled list with left shoulder inflammation, took his lumps. The lefty gave up five runs on seven hits and two walks while striking out three over 4 2/3 innings. He gave up two home runs.
“It’s a tough game to be good every time you go out there. I’m talking about everybody,” Toronto manager John Gibbons said. “We struggled out of the gates on the mound, too. They put four up … and then they added on early.”
Every Rangers player in the lineup reached base safely.
Up 5-0 in the top of the seventh, Martinez left after issuing a walk to Smoak with one out. Leclerc entered in relief and proceeded to walk the bases full.
He struck out Steve Pearce in an 11-pitch at-bat for the second out before surrendering a run-scoring single to Ryan Goins.
Leclerc struck out Kevin Pillar to get out of the inning.
“We hit some balls hard tonight,” Gibbons said. “We had some opportunities but didn’t get the big hit.”
Liriano gave up two home runs for only the second game all season. The Blue Jays had won each of his previous six starts, supplying an average of six runs in each of those.
“I think I missed a couple pitches, but at the same time they were hitting some good pitches,” Liriano said. “You have to give some credit to the hitters and just find a way to get better next time.”
Right-hander Jeremy Jeffress and lefty Alex Claudio combined to pitch a scoreless eighth, and right-hander Keone Kela worked a scoreless ninth.
Smoak reached base safely twice with a double and a walk. Kendrys Morales, who went 2-for-4, has multiple hits in three consecutive games and four of his last six.
The Rangers jumped on Liriano in the first inning, using both small and long ball.
Delino DeShields led off with a bunt single, stole second, and took third on a wild pitch. He came home on Beltre’s groundout to short.
Gomez, the next hitter, hit a 1-1 pitch into the left-field seats. Lucroy added an RBI double that drove in Rougned Odor from first, and Napoli drove in Lucroy with a base hit.
Martinez, meanwhile, encountered little trouble, working around leadoff runners in the second and fourth innings.
“I think Nick has handled every situation that we’ve put him in over the last three years about as good as any pitcher we’ve had,” manager Jeff Banister said. “He takes the ball whenever we ask him to pitch, whether it’s out of the bullpen, starting role. He’s done a tremendous job.”