DALLAS (SMU) – SMU’s eighth straight win came in dramatic fashion on Thursday as the Mustangs completed a 4-2 comeback win over No. 4 USF at the Crum Tennis Courts. The marathon quarterfinal match lasted over three hours and featured four set tiebreaks, all of which the Mustangs won. 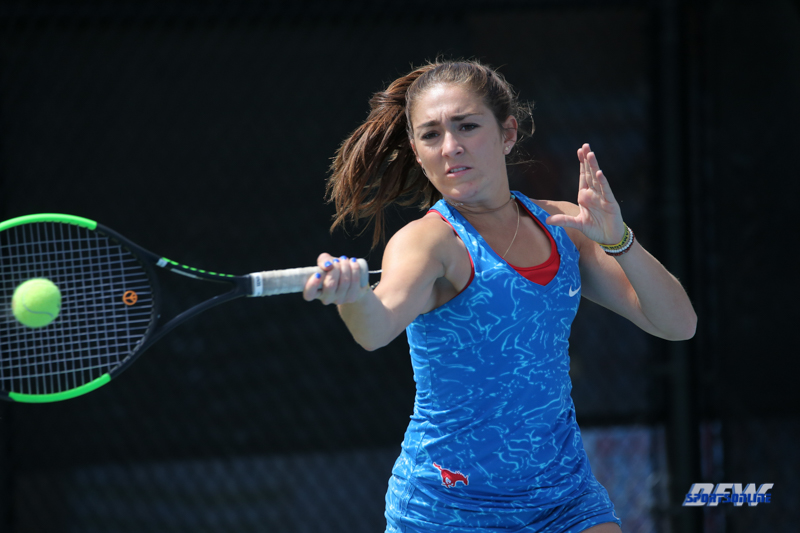 The Mustangs advance to the semifinals of the American Athletic Conference Championship for the fourth consecutive year and will look to upset top-seeded UCF Friday at 3 p.m. at the SMU Tennis Complex.

The Mustangs appeared fallible early, dropping the doubles point and No. 6 singles to quickly trail the Bulls 2-0. But SMU stayed determined not to fall to USF for a second time this season.


Anzhelika Shapovalova found a 6-3, 7-6 (5) win at No. 3 to create the spark, and Karina Traxler followed with a 6-2, 7-5 (5) win at the top position to equalize the match. Traxler’s victory was her sixth straight and 14th of dual match season.

The match remained tied as the remaining courts battled to third sets. After dropping the first set, Sarai Monarrez Yesaki found second and final set victories to put the Mustangs up 3-2. Her third match went to a tiebreak, but she surrendered just one point to her opponent. Her match finished 4-6, 6-3, 7-6 (1).

Trailing by just one, the Mustangs turned to Liza Buss on court two. The junior was forced into a third set after winning the first and giving up a lead in the second. Nevertheless, Buss charged on to win, 6-2, 5-7, 6-2 and push the Mustangs into the next round.

The Mustangs will face the Knights for the second time this season. SMU fell, 6-1, to UCF at home in February.