DALLAS (SMU) – Football is often referred to as a game of inches. It’s a cliché, but on Saturday afternoon in Ford Stadium, that was most definitely the case as SMU edged Tulane by the narrowest of margins.

Trailing by three points with nine seconds remaining and Tulane one yard away from winning the game, the Green Wave signal caller Jonathan Banks took off for the goal line. With no timeouts left, it was a do-or-die play. Junior linebacker Kyran Mitchell met him at the goal line and found a way to get him down what appeared to be right at the end zone.

DALLAS, TX - NOVEMBER 25: SMU takes the field prior to the game between SMU and Tulane on November 25, 2017, at Gerald J. Ford Stadium in Dallas, TX. (Photo by George Walker/DFWsportsonline) 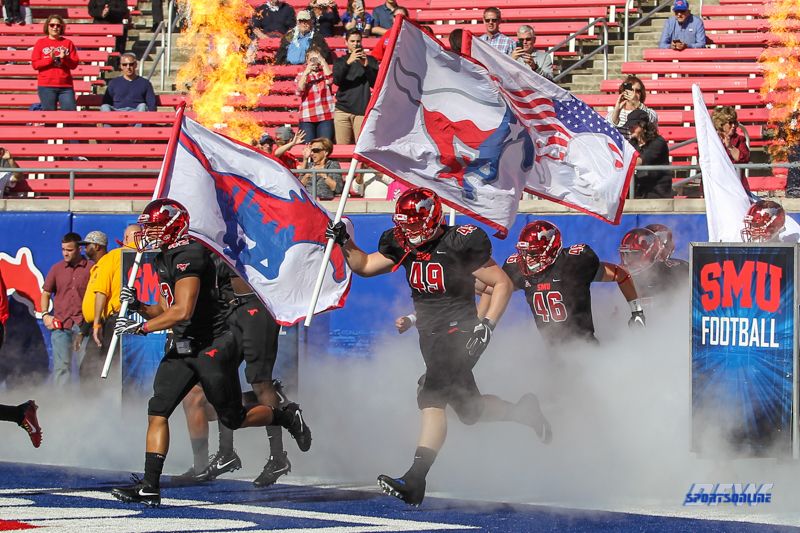 DALLAS, TX - NOVEMBER 25: SMU takes the field prior to the game between SMU and Tulane on November 25, 2017, at Gerald J. Ford Stadium in Dallas, TX. (Photo by George Walker/DFWsportsonline)

The fireworks for the win went off as the referee marked the ball at the one, but the drama didn’t end there. The referees moved the celebrating Mustangs back to the sideline and a lengthy review followed to decide the fate of the game. The review only lasted a couple minutes, but it felt like much longer with the game hanging in the balance. The final verdict: call stands and Mustangs win.

“I kept thinking with what these kids have gone through the last three weeks and what they’ve gone through since this rebuild, we’re due,” head coach Chad Morris said. “It was fitting, the way it all went down. It’s 60 minutes. You couldn’t have played one more second or played one more inch. There was no bigger play in this program since I’ve been here than that one play.”


SMU’s defense came up big on the drive prior as well. Tulane, then with a four-point lead, faced fourth-and-two from SMU’s 36-yard line with a chance to extend the lead. Fittingly on Senior Day, senior Justin Lawler blew by the Tulane tackle to wrap up Tulane’s signal caller for a big loss to give the ball back to the offense at midfield with a chance to retake the lead.

The offense would do just that, producing an impressive 11 play, 50 yard drive that bled off over five minutes of the clock. Obviously, ever one of those seconds burned were vital for the SMU victory. The go-ahead strike came with the offense facing a precarious position, third-and-13. Quarterback Ben Hicks found junior Trey Quinn on a post in the end zone for the score that proved to be the game-winner.

Quinn has been a nightmare for defenses all season, and that continued against Tulane. The junior hauled in six passes for a team-leading 139 yards and two touchdowns. Quinn wasn’t the only receiver making plays on Saturday, though.

Playing his final game in Ford Stadium, All-American Courtland Sutton put together a highlight reel type of game and showed what makes him so special. He finished with six catches and 106 yards, including two ridiculous catches on third down that helped extend Mustang drives. Sutton also eclipsed the 1,000-yard mark for the season in the regular season finale.

The season continues for the Mustangs as the team awaits their bowl destination. Bowl selections will be announced one week from Sunday on December 3. SMU will be returning to the postseason for the first time since 2012.

“It’s amazing to see these kids where we started and where we are now,” Morris said. “I’m so proud of this team and where this program was just three years ago to be 7-5 and guaranteed a winning season. It’s really special to be in that locker room now and watch these seniors, especially in the fashion of the win and the way it happened.”