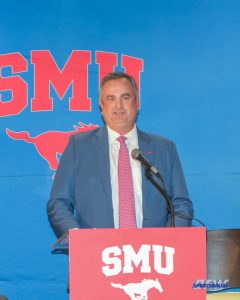 “I can’t tell you how excited I am to be introduced as the Head Coach at SMU. This is home and this is a program I grew up watching. I watched Mustang legends compete and I could always see myself putting on that iconic pony. Today, I’m proud to do just that.

“Coach Morris did great things here and I am fortunate that I have been selected to take the foundation Chad and his staff put in place and take it to a new level. And, make no mistake – That is what we plan to do.

“Our brand of football is fun. It’s about excitement. We are going to score a lot of points – always have, always will – and we will balance our offensive production with defensive results. They say that ‘Defense Wins Championships,’ and we will look to build a championship-level defense on the Hilltop. One that attacks and plays downhill, just like our offense.

“I want to thank President Turner, Rick Hart and the rest of the distinguished search committee. I could feel the passion in that room. I know we have great leadership here and great momentum as well.


“This is a proud football program with a rich tradition. It is also a proud academic institution. I place great emphasis on both. We will set lofty goals for our program, but will keep our primary focus on improving every day in all phases on and off the field to ensure we build a total program and shape champions.”

“It is my pleasure to introduce Sonny Dykes as the Head Football Coach at SMU,” said Hart. “Coach Dykes is enthusiastic about joining the Mustang family. He has a plan to assemble a talented staff, dedicated to shaping champions and pursuing championships with integrity. Coach Dykes shares our commitment to establishing SMU as the best overall program in the American Athletic Conference. We welcome Sonny, Kate, Ally, Charlie and Daniel to the Hilltop.

At Cal, Dykes returned the school’s football program to national prominence and a post-season bowl game. Inheriting a team that went 3-9 in the season before his arrival, Dykes had the Bears at 8-5 just three seasons later, capping the 2015 season with a win over Air Force at the Lockheed Martin Armed Forces Bowl.

In his final season at Cal in 2016, Dykes led several Bears to national honors. Wideout Demetris Robertson earned Freshman All-America honors, as he hauled in 50 catches for 767 yards to break DeSean Jackson’s freshman school records. Fellow wide receiver Chad Hansen was a first-team All-Pac-12 selection, and at the end of the regular season, Hansen ranked second in the country in receiving yards per game (124.9) and third in receptions per game (9.2) as well as seventh nationally in receptions (92) and 11th in receiving yards (1,249) despite missing two contests due to injury. Quarterback Davis Webb was honored as Athlon Sports’ Pac-12 Newcomer of the Year, was a Davey O’Brien National Quarterback Award and Earl Campbell Tyler Rose Award semifinalist, and made the cut to the final 15 for the Johnny Unitas Golden Arm Award. Webb completed 382-of-620 passes (61.6%) for 4,295 yards with 37 passing touchdowns. He ranked among the nation’s leaders in nearly every passing category and set Cal single-season records for passing attempts, completions and total plays, and equaled single-season school marks for most touchdowns responsible for and 300-yard passing games.

Cal’s eight wins in 2015 marked the school’s most victories since 2009. Cal began the 2015 season with five straight victories to mark the program’s best start since 2007 before dropping four of their next five games to teams that were all ranked in the top 10 at some point in 2015, including top-five foes Oregon and Utah, with four of those five contests on the road. Cal finished strong, though, with three wins in its final four contests. At one point, the Bears were ranked for four consecutive weeks, moving as high as No. 19 in the Coaches Poll and No. 20 in the AP Top 25 in Week 7. Cal’s national rankings were its first since 2010 (Coaches Poll) and 2009 (AP Top 25). Cal’s offense flourished in 2015, setting numerous records, including single-season school marks in passing yardage (4,892), passing yards per game (376.3 ypg), passing touchdowns (44), total offense (6,879), total yards per game (529.2 ypg), total touchdowns (63), first downs (341) and first downs passing (201), as well as a modern-era record for points (493), with all the marks previously set in 2013 or 2014 under Dykes. Cal ranked third nationally in passing offense, eighth in total offense and 17th in scoring offense, and became the first college football team in recorded history to have six players with 40 or more receptions and three 500-yard rushers in the same season. For his efforts, Dykes was named to the midseason watch list for the 2015 Dodd Trophy.

The 2015 season was also the last in the Bay area for quarterback and NFL No. 1 Draft pick Jared Goff, who set 26 school records from 2013-15, including career marks for passing yardage (12,220), touchdown passes (96), total offense (12,086) and completions (977). In 2015, Goff ranked second nationally in passing yards per game (363.0), one of 10 categories in which he rated among the top 20 nationally. Goff was the first Cal quarterback to earn first-team All-Pac-12 honors since Aaron Rodgers in 2004, was a semifinalist for the Davey O’Brien National Quarterback Award and was Cal’s Most Outstanding Player in the Armed Forces Bowl.

Cal finished the 2014 season with a 5-7 overall record and set or equaled nine single-season school or modern-era school records on the offensive side of the ball. Cal established then-single-season records for passing yards (4,152), passing touchdowns (37), total yards per game (495.2 ypg) and first downs passing (188), as well as then-modern-era school records for points (459), scoring average (38.2 ppg) and touchdowns (61) that were all broken in 2015. In addition, the Bears became the first Cal team in the modern era to score 55 or more points in a game three times, including 40 or more on five occasions and 30 or more 10 times. Cal ranked in the top 25 nationally in a seven offensive categories including passing offense (6th, 346.0 ypg), scoring offense (10th, 38.3 ppg), total offense (13th, 495.2 ypg) and team passing efficiency (24th, 145.77). Cal was able to achieve all of this with 42 players seeing action for the first time in their Cal career including 23 freshmen and 19 other players appearing for the first time in their Cal careers.

Despite being an inexperienced unit that was the nation’s second-youngest to start the season and battling injuries that caused players on the preseason depth chart to miss 138 games, Cal still set then-school records in 2013 for single-season passing yards (3,977), pass completions (368) and total plays (1,046). The passing offense finished 10th in the nation with an average of 331.4 yards per game.

In all, Cal’s turnaround off the field was just as impressive over Dykes’ tenure, as evidenced by a single-season Academic Progress Rate (APR) score of 997 in 2016. After successive one-year scores under 930 in the two years before Dykes arrived on campus, the rates for the football program under Dykes were 969, 946, 997 and 991, registering Cal Football’s best-ever four-year APR with a score of 978, up 33 points over the his four years at the helm.

Dykes came to Cal after spending three seasons at Louisiana Tech where he directed an offense that led the nation in both scoring offense (51.50 ppg) and total offense (577.92 ypg) during his final campaign at the helm in 2012. He spent three seasons as head coach for the Bulldogs, compiling a 22-15 overall record and winning 16 of 17 regular-season games during one stretch over the 2011 and 2012 schedules.

The Bulldogs were 4-8 the year before he arrived in 2009, then proceeded to finish 5-7, 8-5 and 9-3 in successive campaigns. In 2011, Louisiana Tech won seven consecutive games to capture the Western Athletic Conference title – the team’s first league championship in a decade – and a berth in the Poinsettia Bowl. For his work, Dykes was named the WAC Coach of the Year.

Dykes’ 2012 Louisiana Tech team had road victories over Illinois, Houston and Virginia. The Bulldogs also lost a narrow 59-57 decision to a Johnny Manziel-led Texas A&M team that later defeated top-ranked Alabama and earned a spot in the Cotton Bowl. Louisiana Tech reached as high as No. 18 in the national polls according to USA Today and was No. 19 in the AP Top 25 after jumping out to a 9-1 start. Bulldog quarterback Colby Cameron was named the 2012 WAC Offensive Player of the Year and earned the Sammy Baugh Award that is presented to college football’s top passer by The Touchdown Club of Columbus.

Dykes’ high-energy style of offense produced a prolific unit that, in addition to leading the nation in both scoring offense and total offense in 2012, produced the fifth-highest per-game scoring average ever by a team in the Football Bowl Subdivision (FBS). The squad also finished among the NCAA’s top 20 in passing offense (3rd, 350.75 ypg), sacks allowed (7th, 0.83 per game), turnover margin (10th, +1.08 per game) and rushing offense (17th, 227.17 ypg). The Bulldogs scored more than 40 points in 11 of 12 games and over 50 points on eight occasions.

As offensive coordinator and quarterbacks coach at Arizona for three seasons from 2007-09, Dykes helped the Wildcats to the 2008 Las Vegas Bowl and 2009 Holiday Bowl after Arizona had not reached the postseason for 10 years. Arizona posted marks of 8-5 both seasons and tied for second in what was then the Pac-10 in 2009 with a 6-3 league mark.

Prior to his tenure at Arizona, Dykes spent seven seasons at his alma mater Texas Tech, serving as receivers coach from 2000-04 and adding the title of co-offensive coordinator from 2005-06. The Red Raiders made seven straight postseason appearances and won 56 games during the span, including four postseason victories over his last five seasons in the Tangerine, Houston, Holiday and Insight bowls. In 2006, Dykes received the Mike Campbell Top Assistant Coach Award from the American Football Coaches Association, the same year he was recognized as one of the top 25 recruiters in the country by Rivals.

Born in Big Springs, Texas, Dykes received his bachelor’s degree in history from Texas Tech in 1993 and was a member of the Red Raider baseball team for two seasons. He is married to the former Kate Golding and they have two daughters, Alta (Ally) and Charlotte (Charlie), and a son, Daniel.