Ryan Suter scored the deciding goal with 7:06 to play as the visiting Minnesota Wild came from behind to beat the Dallas Stars 3-1 on Friday.

Suter got the game-winner as he skated to the right of Dallas goaltender Ben Bishop and centered a shot that caromed off Stars defenseman Esa Lindell and into the goal before Bishop had time to react.

DALLAS, TX - OCTOBER 19: Minnesota Wild Winger J.T. Brown (23) during the game between the Dallas Stars and Minnesota Wild on October 19, 2018 at the American Airlines Center in Dallas, TX. (Photo by George Walker/DFWsportsonline) 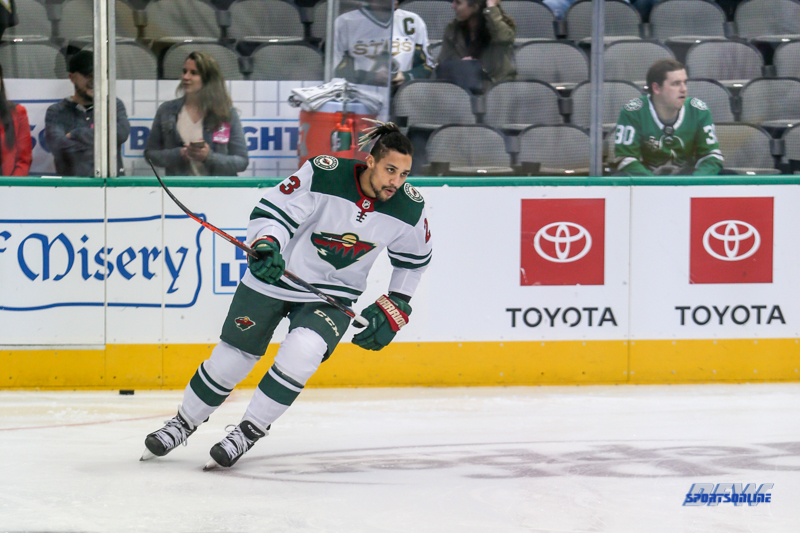 DALLAS, TX - OCTOBER 19: Minnesota Wild Winger J.T. Brown (23) during the game between the Dallas Stars and Minnesota Wild on October 19, 2018 at the American Airlines Center in Dallas, TX. (Photo by George Walker/DFWsportsonline)

The win was the second straight for the Wild.

Jason Spezza put Dallas in front early in the third period when he was in front of the goal jockeying with Minnesota defender Jonas Brodin as Miro Heiskanen ripped a shot from the left point that was heading wide of the target.

But Spezza deflected the puck at near-waist level, and it flew under the right arm of Wild goalie Devan Dubnyk and into the net just 36 seconds into the period. Devin Shore also got an assist on Spezza’s tally. It was the Stars’ first goal in 143 minutes, 42 seconds, spanning almost two complete games.

Matt Dumba tied the game at the 9:37 mark of the third period when he swept in the rebound of a shot from the point past Bishop. Mikael Granlund and Zach Parise garnered assists on the score.

Suter got an assist, his fifth of the season, on an insurance goal by Parise with 1 minute to play.

The game was scoreless after two periods despite a 30-21 edge for Dallas in shots on goal, 24 of which came in the second period for the Stars when Dubnyk stopped good chances from every angle, including once when a Dallas skater got behind him in the crease.

Minnesota ended up with a 36-34 edge in shots, as the Stars managed just four on goal in the third period.

Dallas winger Alexander Radulov missed the game with a lower-body injury and was replaced on the Stars’ first line by Roope Hintz. The Stars have lost their past three games and are 1-4-0 since beginning the season 2-0-0.

Friday’s game was the first of a back-to-back for the Wild, who play Tampa Bay at home on Saturday. Next up for Dallas is another home match against Los Angeles on Tuesday.