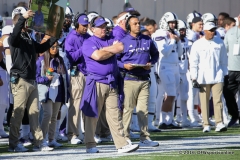 Patterson put an emphasis on getting stronger after his team faltered in the 2nd half of games late in the season.  “At the end of the year, we got beat up in the second half against a couple of teams.  We’ve got to get stronger.  We’ve got to be more physical and mentally tough”, Patterson said during the Big 12 Media Days.

The TCU offense will need more consistency, in 2016, the receiver core dropped more passes than any team in the country, per Pro Football Focus.  Senior quarterback Kenny Hill, who led the Big 12 with 13 interceptions, will face a challenge from freshman Shawn Robinson.


The running game can be effective, led by senior Kyle Hicks, who is also a receiving threat.

Patterson built a reputation for a stout defense, and he is counting on 8 returning starters to bolster that unit.  Senior linebacker Travin Howard led the team and the Big 12 in tackles last season and is the most versatile player on the squad.

The kicking game was woeful in 2016, and no one stepped up during the spring to save it.   KaVontae Turpin is a return threat if he can stay healthy.

Consistency at the head coach should give TCU an edge against some key Big 12 opponents, but a difficult road schedule will be key to conference success. 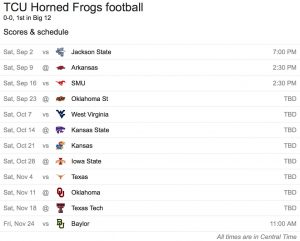