FORT WORTH, Texas — TCU has more than proved it belongs with the elite in college football since joining the Big 12 six years ago. But through all of their successes, the Horned Frogs have yet to win an outright Big 12 title.
They get that shot next week.
Kenny Hill accounted for four touchdowns and No. 12 TCU locked up a berth in the Big 12 Championship Game by outlasting Baylor 45-22 Friday at Amon G. Carter Stadium.

DALLAS, TX - November 24: Baylor Bears quarterback Charlie Brewer (12) is sacked during the game between the Baylor Bears and TCU Horned Frogs on November 24, 2017, at Amon G. Carter Stadium in Fort Worth, Texas. (Photo by George Walker/DFWsportsonline) 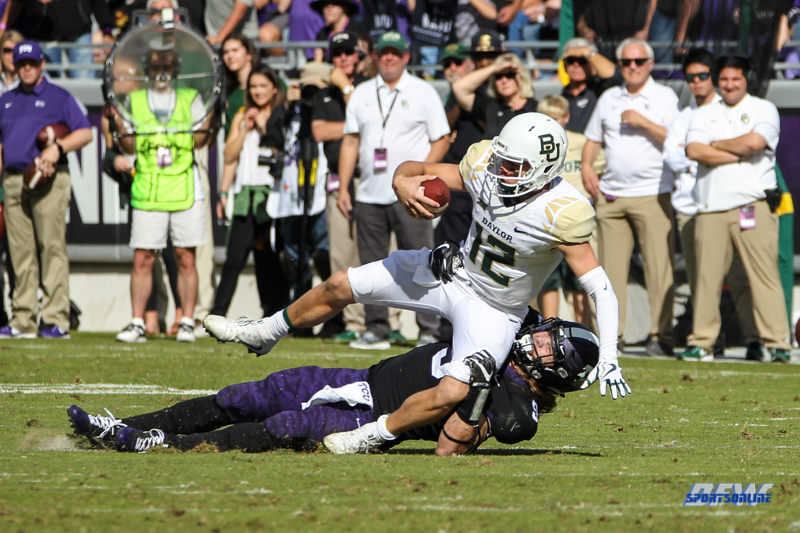 DALLAS, TX - November 24: Baylor Bears quarterback Charlie Brewer (12) is sacked during the game between the Baylor Bears and TCU Horned Frogs on November 24, 2017, at Amon G. Carter Stadium in Fort Worth, Texas. (Photo by George Walker/DFWsportsonline)


The Horned Frogs (10-2, 7-2) set up a rematch with No. 4 Oklahoma on Dec. 2 at AT&T Stadium in nearby Arlington. The Sooners beat TCU 38-20 in Norman on Nov. 11.
“I relish a chance to win a championship,” TCU coach Gary Patterson said. “That’s what you get in here to do. … It won’t be at their place. It’ll be 20 minutes down the road and we’ll get an opportunity to do it again.”
Patterson, the winningest coach in school history, announced after the game that he’s received a contract extension through 2024.
The Frogs are likely out of the running for a spot in the College Football Playoffs, even if they beat Oklahoma, but a win would give TCU its first outright conference crown since winning the Mountain West in 2011.
“We will prepare like any other game, go out there and play TCU football,” Patterson said. “That’s the game we are going to focus on and hopefully win ourselves a Big 12 Championship.”


Hill, the senior quarterback back after missing one game with concussion-like systems, completed 26 of 36 passes for 325 yards and three touchdowns. He added another score rushing.
The Frogs found themselves down 9-0 in the first two minutes of the game to a longtime rival in the midst of a miserable season. TCU would run off 21 unanswered points and never relinquished the lead the rest of the way.
There were some anxious moments as the Bears (1-11, 1-8) hung around, as they’ve done often during coach Matt Rhule’s first year, before fading down the stretch.
“It was obviously a disappointing end to a disappointing year,” Rhule said. “As it has been with many games, we proved for long stretches of the game that we can hang in there with a team of that caliber and then a mistake here and a mistake there or a play here or a play there and the game gets away from us.”
True freshman quarterback Charlie Brewer did his best to keep Baylor close by throwing for 301 yards and two touchdowns, and running for another 49 yards. Brewer dislocated his shoulder after taking a hard hit late in the third quarter and was replaced by Zach Smith.
TCU rolled up 437 yards and outscored the Bears 24-3 in the second half. The Frogs’ defense forced three turnovers and set a season high with eight sacks, including a school-record 5.5 sacks by Mat Boesen.
Baylor took a quick 2-0 lead with a safety in the game’s first minute after forcing a fumble from Hill in the end zone. TCU avoided a defensive touchdown after the ball was recovered by an offensive lineman.
The Bears got that touchdown two plays later when Brewer and Blake Lynch connected on a 54-yard catch-and-run. Lynch had four catches for 110 yards.
TCU had a 14-9 lead before the first quarter was up. A lost fumble by Brewer deep in Baylor territory turned into a short touchdown run by Hicks. Hill then connected with Jarrison Stewart on a 7-yard scoring pass in the final minute.
The Bears fell behind 21-9, but closed out the first half with 10 straight points. Trestan Ebner took a check-down pass from Brewer 58 yards for a touchdown and Conner Martin nailed a 48-yard field as the half ended.
“We had a chance at halftime and to not be able to hang in there in the third and fourth quarter, and allow them back in was disappointing but also emblematic of where we are and what we have to do,” Rhule said.
Rhule was hired to rebuild a program left in shambles by former coach Art Briles. This was Baylor’s first losing record since going 4-8 in 2009 under Briles.