Patrick Mahomes threw for 586 yards and six touchdowns, all of those scores in the first half, as Texas Tech rolled past swooning Baylor 54-35 on Friday in Big 12 play at AT&T Stadium in Arlington, Texas.
Mahomes passed for 412 yards in the first half alone as Texas Tech led 42-21 at intermission. Five of those scoring tosses covered 35 yards or more, and three — an 81-yarder to Quan Shorts, an 80-yard connection with Keke Coutee 2:13 later and a 62-yard catch-and-run to Jonathan Giles — were for at least 62 yards. 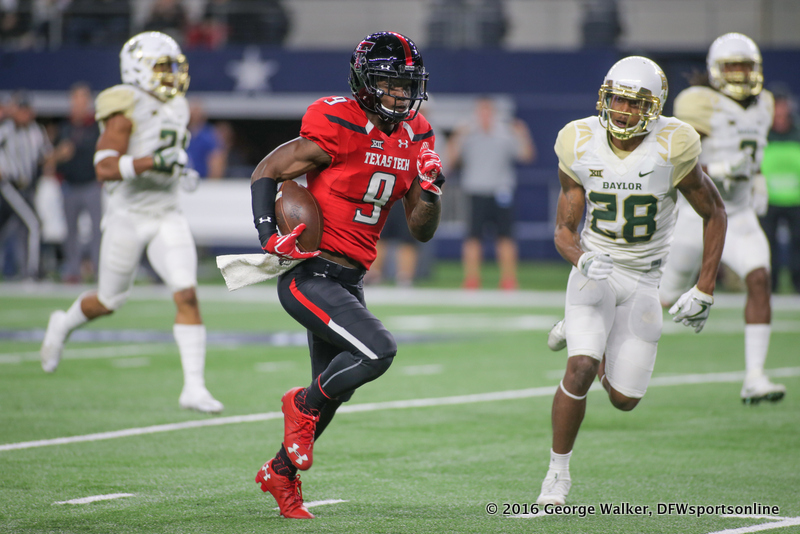 
Mahomes ended up hitting 30 of his 46 passes and did not throw an interception.
Texas Tech (which ends its season 5-7) amassed 666 total yards and averaged 8.4 yards per snap in the win. Dylan Cantrell had two scoring catches, from 40 and 6 yards, Coutee (221 yards receiving on eight catches) added a 35-yard TD reception for Tech and Da’Leon Ward had 82 yards and a 5-yard touchdown run on 20 carries to lead the Red Raiders’ rushing attack.
Baylor (6-5), which lost for the fifth straight game after starting the season 6-0, was led by freshman quarterback Zach Smith’s 377 yards passing.
Ishmael Zamora hauled in 12 of Smith’s 30 completions (on 46 attempts) for 144 yards and a 21-yard touchdown. K.D. Cannon added 132 yards receiving and had two TDs, on a 53-yard hookup in the first quarter and a 9-yard touchdown in the third. Only four Baylor players caught passes in the contest.
Terrance Williams rolled to 147 yards and two touchdowns on 23 carries for the Bears, who are bowl eligible and have one more game to play, on Dec. 3 in Morgantown versus West Virginia.