Texas Tech tied the game late in regulation, then won it on a 37-yard field goal from Clayton Hatfield to end the second overtime in a 27-24 road victory over TCU in a Big 12 game Saturday in Fort Worth, Texas. 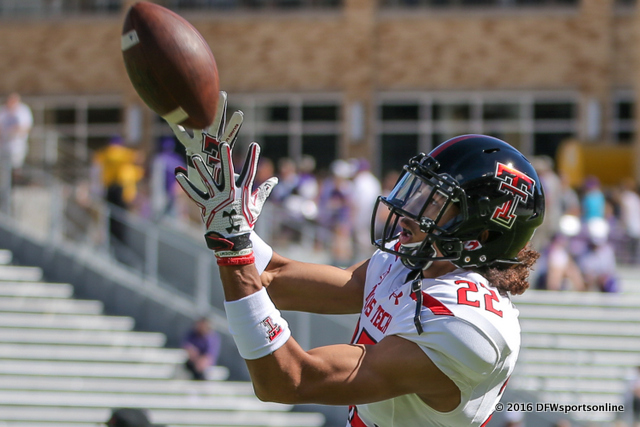 Horned Frogs kicker Brandon Hatfield, who missed field goal attempts from 37 and 32 yards in regulation, missed badly to the left on a 40-yard attempt to start the second overtime.
Texas Tech (4-4, 2-3 Big 12) gained only 315 yards in regulation a week after rolling to 854 yards in a loss to Oklahoma. But 80 of those yards Saturday came on a 16-play drive that tied the game with 1:28 to go on an 8-yard pass from quarterback Patrick Mahomes to wide receiver Dylan Cantrell.
TCU’s Hail Mary attempt from the Texas Tech 46 was incomplete.
Texas Tech scored first in overtime on Mahomes’ 15-yard scramble up the middle. TCU (4-4, 2-3) answered with backup quarterback Foster Sawyer’s 25-yard fade pass amid tight coverage to wide receiver Desmon White.
Mahomes completed 24 of 39 passes for 206 yards, far below his national-best average of 473.3 yards per game. But he did make key plays with his feet, including scrambling for a first down on fourth-and-3 at the TCU 45 on the game-tying drive late in the fourth quarter.
With the game knotted at 10 late in the third quarter, Texas Tech punter Michael Barden dropped a good snap and was tackled at the 15. TCU subbed in Sawyer for quarterback Kenny Hill — who had thrown his 10th interception of the season on the previous series — and drove for a touchdown that was scored on 1-yard run by running back Trevorris Johnson with 14:37 left in the game.
Sawyer completed 6 of 17 passes for 86 yards and a touchdown.
Texas Tech running back Da’Leon Ward rushed 23 times for 98 yards and caught a team-high eight passes for 49 yards.
TCU linebacker Travin Howard made 19 tacles, including a sack.