FORT WORTH – TCU’s historical 2016 campaign came to a disappointing end in a 1-0 loss to Texas A&M in the first round of the NCAA Tournament hosted by the Horned Frogs. The Aggies struck for a goal in the seventh minute and made it stand up. 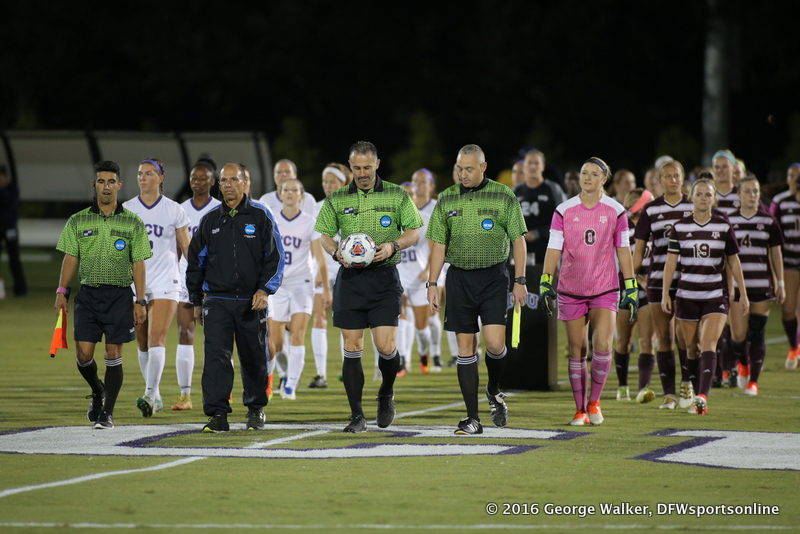 Image 1 of 27
TCU controlled the play for the majority of the game, outshooting Texas A&M, 11-4. The Frogs held a 5-1 shot advantage at the half, but that one shot was the difference in the game.

Texas A&M capitalized on its first opportunity of the evening, opening the scoring in the seventh minute. Haley Pounds carried the ball down the right side of the field and sent a cross into the goal area. Mikaela Harvey tapped the ball back to an open Stephanie Malherbe, who shot it into the upper portion of the goal for a 1-0 lead.

TCU pushed hard following the goal to get the equalizer. Emma Heckendorn had a golden opportunity from a severe angle, but the Aggie keeper, Danielle Rice was just tall enough to knock it over the goal.

In the second half, TCU continued its push for the game-tying goal. No chance was better in the match than the one for Heckendorn in the 66th minute. Courtney Forte made a slick move to beat her defender and fed a great pass to Heckendorn. Her cross-body shot missed the open net by mere inches.

TCU continued to push, but the Aggie defense held strong, limiting the Frogs to just two shots the remainder of the contest to hold on to its 1-0 lead.