Via The Sports Xchange

ARLINGTON — Despite picking up a 10th straight win Thursday against the Washington Redskins, the Dallas Cowboys did not force a turnover for the third straight game.
While forcing turnovers is always a recipe for success in the NFL, the Cowboys found the weapon to compensate for it.
The weapon is rookie quarterback Dak Prescott.
Behind Prescott’s 17 completions for 195 yards, his scoring run of six yards and a touchdown pass to Terrence Williams, Dallas solidified its lead in the NFC East with a 31-26 over Washington. 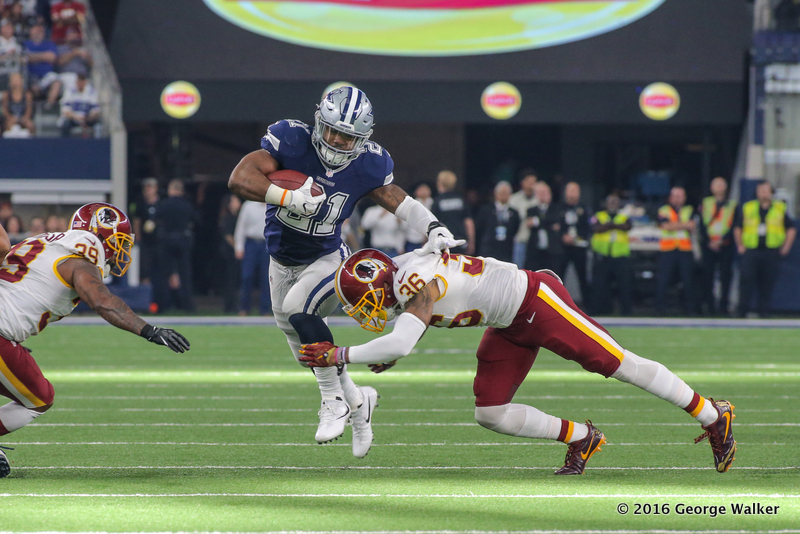 
Prescott’s solid all-around performance improved the Cowboys to a franchise and NFL-best 10-1. His latest showing also extended Dallas’ lead over the New York Giants to 2 1/2 games.
“We have high expectations for ourselves on offense,” Prescott said. “We obviously want to score on every possession and they gave us some scoring chances late.
“No matter if we’re up or down, we’re going to go out there and score and I think we’ve shown that the last couple of weeks.”
Prescott wasn’t flashy throughout, but heated up when it mattered most in the fourth quarter. He has five rushing touchdowns, has thrown for 18 TDs and only been intercepted twice.
The Cowboys took a 17-6 lead into the fourth quarter and the Redskins scored two touchdowns. Each score was answered by Prescott leading two seven-play scoring drives.
Prescott capped the 75-yard drive with a six-yard TD run with 10:49 remaining. Rookie running back Ezekiel Elliott capped a 45-yard drive with a one-yard run with 6:29 left.
“Those guys are just really good football players,” Dallas tight end Jason Witten said. “I don’t think we really view them as rookies.
“The responsibilities that have been thrown on them, they’ve handled it well and they’re executing at in a big way at critical times throughout games.”
Franchise-tagged quarterback Kirk Cousins completed 41 passes for 449 yards and three touchdowns but the Redskins (6-4-1) could not come up with the magic to make a late push.
Washington didn’t get its first touchdown until the start of the fourth quarter and the Cowboys defense didn’t buckle in the final 6:29
Cousins connected with Jordan Reed on a five-yard TD six seconds into the fourth and pulled the Redskins within 24-19 on a 67-yard scoring strike to DeSean Jackson with 9:22 remaining.
“We pulled within striking distance a couple of times, but the way Dallas was able to come back and score says a lot of how good of a football team they have and why they’re leading out division,” Cousins said. “We know as an offense, that the job’s the same and we need to put points on the board and manage it well.
The Redskins made one final push, pulling within five points on a eight-yard touchdown catch by Reed with 1:53 remaining in the game.
Prescott got the Dallas offense off on the right foot in the first quarter, working the ball 75 yards in seven plays for the opening score.
Elliott got the first of his two scoring runs from four yards to make it 7-0 with 11:09 left in the first.
Prescott connected on pass plays of four yards to Elliott and 13 yards to Cole Beasley yards to keep Washington off balance.
The Redskins couldn’t hit pay dirt in the first half, coming away with just two field goals despite Cousins completing 18 passes for 216 yards.
Dallas’ defense held up in the first half, thanks to some timely penalties and strong coverage downfield.
Cousins worked the Washington offense to the Dallas 19 yard line on its opening possession, but came away with nothing when kicker Dustin Hopkins missed a 43-yard field goal attempt.
He missed another 55-yard attempt in the second quarter, but connected later on field goals of 24 and 20 yards.
“I’m glad coach has confidence in me, but I’ve got to capitalize at the same time,” Hopkins said. “The 55-yarder was a makeable kick and looking at the ball, I knew I struck it well, I just left it right.”
Washington finished with 505 total yards of offense while Dallas had 353 yards in a near-balanced attack.