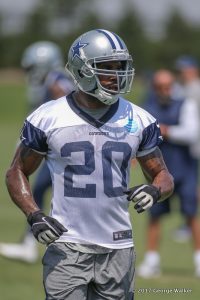 FRISCO, Texas – The Cowboys have released Darren McFadden, giving the veteran running back a chance to land with another team this season, head coach Jason Garrett confirmed Sunday.

McFadden has been a healthy inactive for all 11 games this season, including the current three-game losing streak coinciding with the first three games of Ezekiel Elliott’s six-game suspension.

“Darren’s been a real good player for us and has been just a first-class guy on our football team,” Garrett said. “We had some good discussions the last couple days. We just felt like it was in the best interest of our team and really the best interest of Darren McFadden as well to release him and give him another opportunity go somewhere else.”

The Cowboys have used a two-back rotation featuring Alfred Morris and Rod Smith during the first half of Elliott’s six-game suspension, and they’ve added a new third running back to the group: Trey Williams has been promoted from the practice squad with McFadden’s open roster spot, Garrett said.

Jones has nine career sacks, all with the Packers from 2013-16. He appeared in three games with the 49ers this season before getting released last week.

Kicker Dan Bailey returned from a groin injury on Thanksgiving, making Nugent inactive against the Chargers.

McFadden’s release ends his three-year run with the Cowboys. Signed as a free agent in 2015, he led the team in rushing (1,085 yards) before settling into a backup role last season behind Elliott, their 2016 first-round pick.

An elbow injury sidelined McFadden for most of last season, but 10-year veteran has been healthy this year.

“I really wish Darren nothing but the best,” Garrett said.