ARLINGTON, Texas — One way for the Los Angeles Angels to get around their offensive struggles is to not allow any runs.
That’s exactly what right-hander JC Ramirez and three relievers did Sunday as the Angels salvaged the final game of a three-game set against the Texas Rangers with a 3-0 victory. 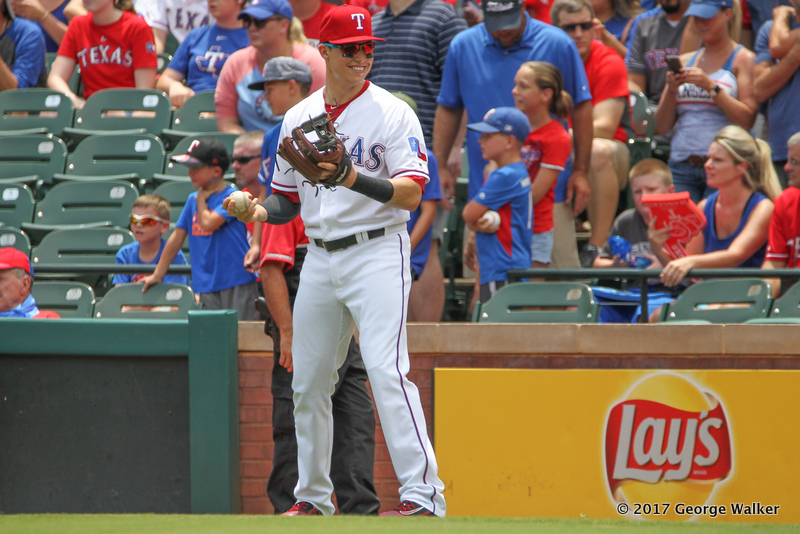 
Despite the win, the Angels (45-47) are below .500 at the All-Star break for the third time in the last five seasons. Texas (43-45) missed a chance to get to .500 for the first time since June 28 after suffering its second shutout of the season.
The Angels had scored a total of four runs in their last three games and the offense was the main culprit for a team that had lost five of six coming into Sunday.
But Ramirez (8-7), who struggled in his last two starts, didn’t allow a hit until Nomar Mazara doubled with one out in the fourth inning. He surrendered just two hits, struck out two and worked around five walks in six innings.
Ramirez was helped out by going with his four-seam fastball.


“Today, I used my four-seam more than my two-seam,” Ramirez said. “I talked with (pitching coach Charles) Nagy about it. We talked about it the last bullpen that I threw and he said, ‘Yeah, why not?’
“I had been throwing all two-seamers. I started throwing them today, but I was kind of rushing my delivery. I thought I did well.”
Los Angeles got three hitless innings from relievers David Hernandez, Cam Bedrosian and Bud Norris to complete the seventh shutout of the season. Norris picked up his 13th save with a hitless ninth to complete the two-hitter.
“The six zeroes were huge, but it’s not often you’re going to walk five guys and come out unscathed,” Los Angeles manager Mike Scioscia said. “But he (Ramirez) got some big outs. He got big outs in the third and then again in the fifth.
“It’s not easy to pitch a shutout in this park. We’ve got four guys that went out there and put up zeroes. That’s tough to do.”
The Angels did just enough against Texas right-hander Yu Darvish (6-8) to give Ramirez the support he needed.
Albert Pujols lined a solo homer to left-center with two outs in the first inning to give the Angels their first lead of the series. The Angels doubled the advantage in the fifth on a sacrifice fly from catcher Juan Graterol.
Darvish gave up two runs and three hits in 7 1/3 innings. He struck out six and walked four and hasn’t won a game since June 12. The Rangers have scored a total of one run while Darvish has been pitching in his last four starts combined.
“Overall, I managed to go through 7 1/3 despite the fact I walked four guys,” Darvish said. “The guys were putting the ball in play early in the count and I think that was a good thing.
“Run support-wise, we’ve not been scoring many runs when I’ve been pitching, but it is what it is. It’s part of baseball. I don’t really think about that.”
Ramirez was able to come up big in key situations. After the Mazara double in the fourth, he retired Adrian Beltre and Rougned Odor.
Texas threatened again in the fifth, putting runners on second and third, but Ramirez got a groundout from Shin-Soo Choo to end the inning.
Texas manager Jeff Banister heaped praise on Ramirez.
“We ran into a guy today who was on top of his game, threw the ball well,” Banister said. “I felt like Darvish threw the ball extremely well. He made two mistakes.
“In those situations, we had two opportunities with runners in scoring position and came away with nothing. I’ll take Darvish continuing to throw the ball well and take our chances.”
The Rangers were 0-for-4 with runners in scoring position and 0-for-12 in those situations in the final two games of the series.
Los Angeles added a run in the ninth on an RBI double from Andrelton Simmons and finished the game with five hits.
Texas didn’t have a hit after a two-out single from Delino DeShields in the sixth.