DALLAS (SMU) – SMU used a strong second half to pull away from UMBC on Friday night, winning 78-67 in the season opener.

The Mustangs were led by Naismith Trophy candidate Shake Milton, who posted a career-high 28 points. The junior was a perfect 10-for-10 from the free-throw line while also dropping in three 3-point buckets.

DALLAS, TX - NOVEMBER 10: Tip-off during the men's basketball game between SMU and UMBC on November 10, 2017, at Moody Coliseum, in Dallas, TX. (Photo by George Walker/DFWsportsonline) 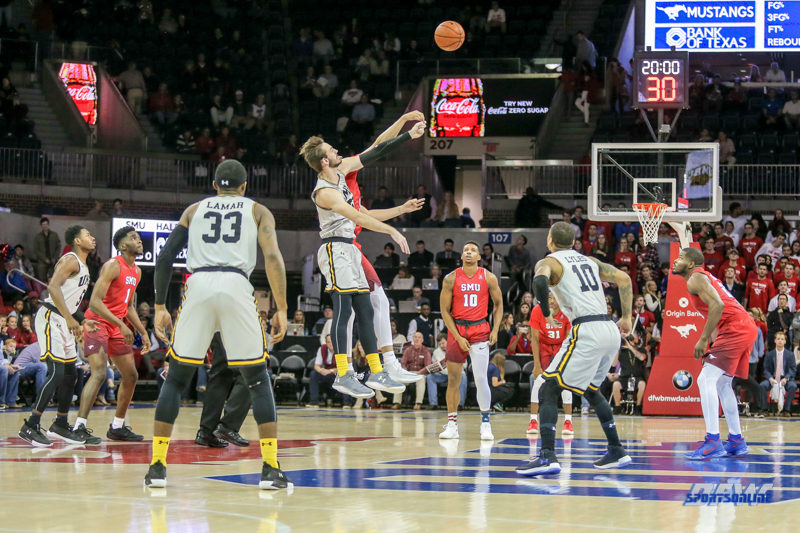 DALLAS, TX - NOVEMBER 10: Tip-off during the men's basketball game between SMU and UMBC on November 10, 2017, at Moody Coliseum, in Dallas, TX. (Photo by George Walker/DFWsportsonline)

“Last year, we had one of the great equal-opportunity offenses,” head coach Tim Jankovich said. “Whether we become that this year, time will tell. Early in the season when there are three guys coming back and four freshmen, we’re going to rely on him to have a lot more opportunities to shoot the ball. He’s not the primary ball hander, and we’re going to run more things for him.”

Junior Jarrey Foster also picked up right where he left off last season, continuing his extremely efficient play on the offensive side of the ball. The Houston, Texas, native poured in 17 points on 6-of-11 shooting.

In his first game as a Mustang, Ethan Chargois also broke into double-figures in the points column. The freshman big man finished with 15 points and showed the ability to stretch the defense, hitting two shots from behind the arc.

“He proved on night one that he’s a good player,” Jankovich said. “He played terrific. He did a lot of great things defensively. It’s not the least bit surprising. He’s been practicing very, very well. He’s done such a good job since he got here. His future is extremely bright.”


After going into half trailing by seven points, the Mustangs clamped down on the Retrievers hard on the defensive side of the ball in the second half. After scoring 45 first-half points, UMBC was held to only 22 in the final 20 minutes. UMBC shot just 31 percent in the second half, including a 2-of-14 mark from 3-point range.

“In the first half, we had foul trouble and we couldn’t get stops,” Jankovich said. “I’m really proud of the team. I hope people are fair to this team. This is a team that has eight scholarship players and only three played last year. We have four freshmen playing their first college basketball game. We just played a really good team.”

SMU also was able to work its way to the free throw line much more frequently in the second half. After attempting only 12 free throws in the first half, the Mustangs made 18 after halftime.

The Mustangs have now won 23-straight games at home in Moody Coliseum. The Mustangs are back at Moody again on Sunday, hosting ULM at 3 p.m.