Craddock leads an offense that continues to improve since his arrival on the Hilltop in 2014, making impressive strides in four major offensive categories including points per game (39.6), passing (315.8), rushing (189.2) and total offense (505.0). SMU’s total offense ranks 10th in the nation, while its passing offense is 13th. The Mustangs are also second in the FBS with only one fumble lost. 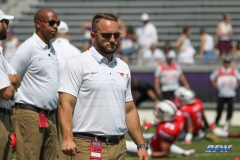 Mustang wide receivers and Biletnikoff Award Watch List members Trey Quinn and Courtland Sutton are among the nation’s top receivers, with Quinn leading the nation with 10.0 catches per game, and Sutton ranking fourth with nine receiving touchdowns. Quinn also holds two of the three top reception performances in the country with 17 catches and Sutton tied an FBS-best mark with four touchdown receptions against North Texas.

The Mustangs have three running backs with over 400 yards, including Xavier Jones, who leads the team with 700 yards (77.8/game) and Ke’Mon Freeman, who has a team-best nine touchdowns. Braeden West adds 468 yards to the Mustangs’ total.

In his first season on the Hilltop, Craddock helped engineer an offensive turnaround, as SMU increased its scoring output by 16.7 points per game – the second-largest increase in the nation in 2015. He also helped develop two of the nation’s top freshmen in Sutton and Jones. Sutton was named a Freshman All-American in 2015 after ranking No. 1 among freshmen with nine receiving TDs. He set an SMU freshman record for receiving yards with 862 and tied former SMU standout Emmanuel Sanders for most touchdowns by a freshman, while Jones set an SMU freshman record with 10 rushing TDs, surpassing SMU greats Eric Dickerson and Zach Line.

In year two, SMU won five games and came within one win of bowl eligibility. SMU produced a 1,000-yard rusher (West 1,036) and 1,000-yard receiver (Sutton 1,246) for the first time since 2011 and had three players with at least 1,000 all-purpose yards for the first time since 2011 (Sutton, West, Proche). Hicks, who was thrust into the starting lineup after preseason starter Matt Davis was lost for the season with a knee injury, threw for 2,930 yards on the season, third-best among all freshmen and eighth-best in a season at SMU.
An 18-member selection committee of distinguished former head coaches, along with a committee representing the Football Writers Association of America will select 15 semi-finalists and five finalists from the list of nominees and an overall winner. Those finalists will be invited to travel to Little Rock, Ark. where the 2017 Broyles Award winner will be announced on Tuesday, December 5th at the Marriott Hotel.