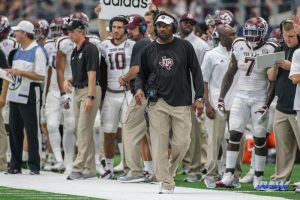 The move comes one day after the Aggies ended their regular season with a 7-5 mark following a 45-21 setback to LSU.
Texas A&M is 51-26 overall and 25-23 versus SEC foes under the watch of the 53-year-old Sumlin, with his overall winning percentage of .662 residing only being R.C. Slocum (123-47-2, .721) in school history.
“Kevin’s tenure included some remarkable achievements and he leaves our program as one of the winningest football coaches in our storied history,” Texas A&M athletic director Scott Woodward said in a statement. “Kevin made us a better all-around football program and led our program with dignity and character. He’s a first-class person.
“Our expectations at A&M are very high. We believe that we should compete for SEC championships on an annual basis and, at times, national championships. I believe that we need a new coach to take us there. On behalf of Aggies everywhere, my thanks to Kevin and his family for his service to Texas A&M. I wish him the very best.”


Sumlin’s fate may have been sealed by his teams’ play at home against SEC foes, as Texas A&M won just eight of its last 22 such games and lost seven straight to SEC West adversaries.
The season started off with the Aggies blowing a 34-point lead and suffering a 45-44 loss to UCLA.
“Every year is different,” Sumlin said on Saturday. “I think in a way, we established a standard and kind of came on the scene right off the bat. Because of that, you look at trends. That’s what people look at. Our trend is we flattened out from a wins standpoint, based on having the best player (Johnny Manziel) in the country the first year, first couple years. That’s part of it.”
Texas A&M produced several top NFL draft picks during Sumlin’s tenure, including at least one first-rounder in each of the past five drafts. The Aggies had three players selected in the first round in 2014 (Jake Matthews, Mike Evans, Manziel) and defensive end Myles Garrett was the first overall pick of the 2017 draft.
Florida State coach Jimbo Fisher will be Texas A&M’s primary target, according to a report from the Houston Chronicle.
TexAgs.com reported on Sunday that Arizona State could be a potential landing spot for Sumlin after that school fired Todd Graham on Sunday.