Texas Tech found a way to hold on in the fourth quarter and the Red Raiders snapped a four-game losing streak by defeating Baylor 38-24 on Saturday at AT&T Stadium in Arlington, Texas.
The Red Raiders, who won the turnover battle 4-1, got a much-needed defensive touchdown in the closing minutes.
Texas Tech defensive back Douglas Coleman stripped the ball from Baylor receiver Tony Nicholson and returned it 31 yards for a touchdown to put Texas Tech ahead by 21 points.
Baylor (1-9, 1-6 Big 12) outgained Texas Tech in total yards 523-337, but the Red Raiders (5-5, 2-5) scored on defense and special teams.

ARLINGTON, TX - NOVEMBER 11: Texas Tech Masked Rider leads the team onto the field before the game between Baylor and Texas Tech on November 11, 2017 at AT&T Stadium in Arlington, Texas. (Photo by George Walker/Icon Sportswire) 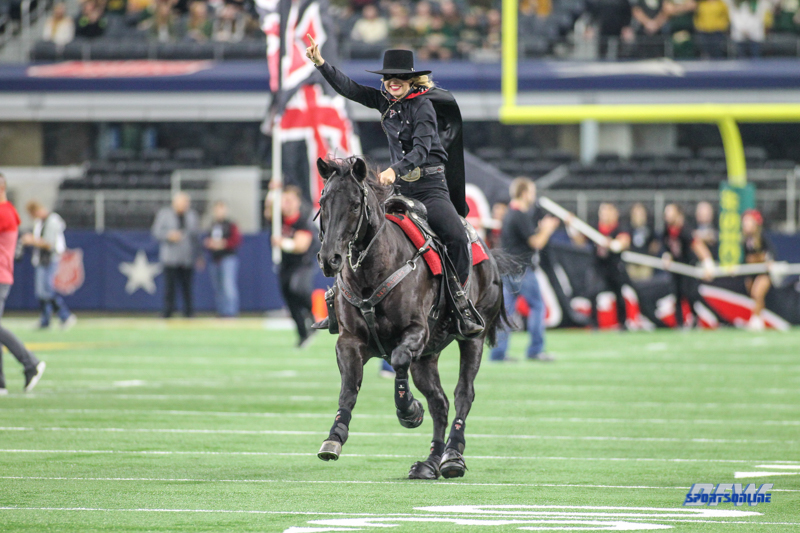 ARLINGTON, TX - NOVEMBER 11: Texas Tech Masked Rider leads the team onto the field before the game between Baylor and Texas Tech on November 11, 2017 at AT&T Stadium in Arlington, Texas. (Photo by George Walker/Icon Sportswire)


Texas Tech quarterback Nic Shimonek completed 24 of 29 passes for 246 yards and a pair of touchdowns. He completed 11 passes for 94 yards to Dylan Cantrell, who kept Red Raider possessions going throughout the contest.
Shimonek connected with wide receiver Cameron Batson for a 30-yard score with 44 seconds left in the third quarter, the Red Raiders’ only offensive touchdown of the second half.


Baylor’s Charlie Brewer completed 43 of 63 passes for 417 yards and three touchdowns. But the Bears failed to score three times in the red zone in the first half, keeping them from putting more pressure on Texas Tech late.
Texas Tech started fast as Keke Coulee found a seam and returned the opening kickoff 92 yards for a touchdown.
Baylor answered the score as running back Gavin Holmes ran 4 yards for a touchdown, tying the game with 10:28 left in the first quarter.
But the Texas Tech defense stopped three Baylor drives inside the Red Raiders 20, keeping the Bears from scoring again before halftime.
Red Raiders linebacker Dakota Allen recovered a Brewer fumble at the Texas Tech 11 to stop a drive late in the first quarter. Texas Tech stood firm at its own goal line to stop a Baylor fourth-and-goal attempt midway through the second, and Red Raiders defensive back Vaughnte Dorsey intercepted a pass in the end zone in the final minute of the first half.
Running back Tre King put Texas Tech back in front with a 1-yard touchdown run midway through the first quarter. King’s score capped a seven-play, 53-yard drive.
Shimonek completed 15 of 17 passes for 140 yards, including a 4-yard touchdown to wide receiver T.J. Vasher in the second quarter that put the Red Raiders ahead 21-7.