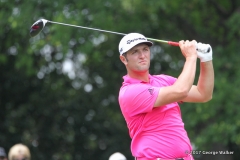 While most of the sports world was locked in on the AFC and NFC Championship games, Jon Rahm catapulted to No. 2 in the world rankings by defeating Andrew Landry in a four-hole playoff to win the CareerBuilder Challenge at the Stadium Course at PGA West.

“To think of being No. 2 in the world, it’s hard to believe,” Rahm said, following his second PGA Tour victory. “You dream of doing those things, you want to do them, you believe in yourself, but to get to where only Seve (Ballesteros) Ollie (Jose Maria Olazabal)and Sergio (Garcia) have gotten, coming out ofhttps://www.pgatour.com/tournaments/careerbuilder-challenge.html Spain. And now me, at the age of 23, it’s beyond belief.”

In moving up to the second spot in the rankings, Rahm leapfrogged Jordan Spieth and now trails only No.1 Dustin Johnson. Johnson recently won the Sentry Tournament of Champions in Kapalua where Rahm finished as the runner-up.

Landry birdied No. 18 to finish at 22-under and in a tie with Rahm to force the playoff. His birdie putt on the final regulation hole was 11 feet and he would miss an 11-foot putt on the fourth playoff hole in what ended up being the deciding hole.

“Tournaments like this build character,” Rahm said. “I’m just proud of myself to hit what’s probably my least favorite club, which is the 3-wood, three times in a row dead center on my line on 18 — four times if you include the regular play.”


The fourth playoff hole would have likely been the last as the sun was quickly setting on the Sunday in Palm Springs.

“I’m sure glad Andrew didn’t make the last putt, because I didn’t want to come back tomorrow,” Rahm added.

Adam Hadwin, who shot a 59 in this event last year, and DFW resident Martin Piller tied with John Huh for third place at 20-under.

Next up on the PGA Tour is the Farmers Insurance Open at Torrey Pines.