After rushing for a career-best 184 yards and two touchdowns in a win over Florida Atlantic, North Texas sophomore RB DeAndre Torrey has been named C-USA Offensive Player of the Week. The Defensive Player of the Week award is shared by FIU senior LB Sage Lewis and Marshall junior LB Omari Cobb. Lewis had 11 tackles and a 61-yard fumble return in a victory at Charlotte, while Cobb had a game-high eight tackles, three TFL’s and two sacks during a 23-0 shutout of UTSA. The Special Teams Player of the Week honor was given to Old Dominion senior PR Isaiah Harper, who had a 74-yard punt return for a touchdown against VMI. All C-USA weekly awards are presented by Top of the World Headwear. 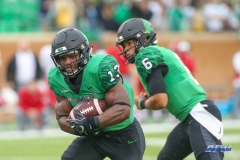 Torrey helped lead the Mean Green to a 41-38 home win over Florida Atlantic, carrying 17 times for a career-best 184 yards, averaging 10.8 yards per carry, with two total touchdowns in the win. He also caught two passes for 38 yards, giving him a career-high 222 all-purpose yards on the night. Torrey opened the scoring for the Mean Green on a 13-yard touchdown catch, his second receiving touchdown of the season and capped it off with a 92-yard TD run that pushed the Mean Green lead to 41-31 late in the fourth quarter. The 92-yard run was the longest offensive play of the season for the Mean Green, the fourth-longest run in program history, and the longest since 1995 when Cedric Cromer busted a 95-yard run. Torrey has a team-high 13 rushing touchdowns on the season, and leads the team with 16 total touchdowns (which ranks sixth in the nation). This is his second Offensive Player of the Week award this season.

Lewis led the FIU defense on Saturday to a 42-35 victory at Charlotte that kept the Panthers tied for first place in the East Division. The linebacker finished with 11 tackles, his sixth double-digit tackle game this season. Lewis’ biggest performance was in the first half when the junior scooped up a fumble and carried it 61 yards for a touchdown to swing momentum in favor of the Panthers. The fumble recovery and touchdown were each career firsts for Lewis. The junior is tied for the conference lead in total tackles (117) and tackles per game (10.6).

Cobb had a team-high eight tackles, including three for loss and two sacks to lead a dominating Marshall defensive effort in a 23-0 shutout victory over UTSA. The Port St. Lucie, Florida native’s defensive unit held the Roadrunners to a school-record minus-26 yards rushing during the game and just 137 yards of total offense, the fewest that a Marshall opponent has managed since the Herd held Ohio to 123 yards during the 2009 Little Caesars Pizza Bowl. UTSA’s minus-1.2 yards per rush is also a Thundering Herd school record. In the last two games, the Herd held Charlotte to 3.03 yards per play and UTSA to 2.49 yards per play. Those are the top two performances against an FBS opponent in the Doc Holliday era

Harper returned a punt 74 yards for a touchdown in Old Dominion’s 77-14 victory over VMI, his first career score on a punt return. Harper added a 16-yard punt return earlier in the game, making his 90 total punt return yards a new ODU record. He helped the Monarchs tie the C-USA record for points scored in the final game at Foreman Field before major renovations begin on the facility. This is Harper’s second C-USA Special Teams Player of the Week honor this season and the third of his career.